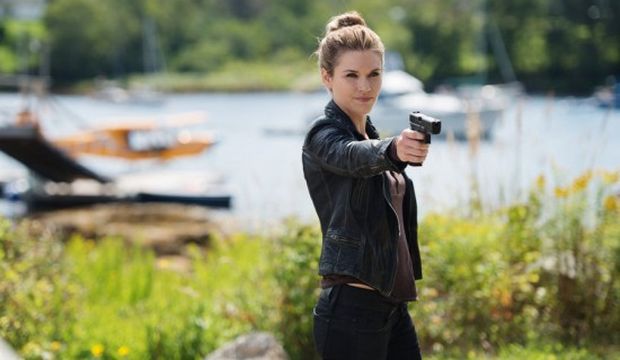 The season five fall finale sees answers finally revealed about just who Mara is and where she comes from, while there are big changes for Audrey, Duke, Nathan and the rest of the gang.

So, a lot happens on Haven this week. Maybe too much. After weeks of reveals happening in dribs and drabs, Haven opens the floodgates and we are finally given the answer to many outstanding questions, which only arouse even more questions, as is the Haven-way.

So, last week’s big cliff-hanger cantered around Charlotte of the not CDC’s real identity. (whispers) She’s Audrey and Mara’s mum. In the episode’s tense opening, she reveals that yes, Mara is her daughter, yes, they come from another more-advanced world or plane of existence, yes that she is around eleven hundred years old and that Mara is around six-hundred-ish, and yes that she’s here to undo the damage Mara has done and that Mara and Audrey cannot remain in the same world or Audrey will die. Boom! I’ll give you a moment to process.

Processed all that yet? Need some more time? Tough, here’s some mere Trouble-related mayhem as we cut to new Trouble-maker Duke who is crying more aether, only this time it is flying off and attaching itself to random people, developing into completely new full-blown Troubles that are causing people to implode or trapping children in the holds of leaky old boats.

Meanwhile, Nathan is looking mournfully—more so than usual—at Audrey, because he knows that it’s the fall season finale and the Haven writers love to make Audrey disappear or die whenever there’s going to be an extended break between episodes. Audrey and Mara finally—finally—have the controversy that we have been waiting for and it is just delicious. It is short and sweet as Mara, armed with a gun and a badass attitude, confronts the increasingly sickly Audrey-husk in a car and reveals even more stuff. She wants “Mommy dearest” to open a Thinny so that she can escape Narnia or wherever or else she’s going to explode Duke. Yes, you heard me right; Haven’s favourite bad boy has been converted into a Trouble bomb. How about that for Trouble? Mara knocks Audrey spark out and saunters away. Badass!

Audrey, of course, goes to spill the beans to her kinda-mum Charlotte. Who should overhear their conversation at the worst, and most plot convenient time? Duke. He takes off, going to see our two favourite bumbling idiots of the week—or should that be show?—Dave and Vince. “You’re going to tell me where I can find an open thinny. Or I’m going to beat you to death. With him,” Duke tells Vince, pointing at Dave, who, being much shorter and skinnier, would be much easier to employ as a bat against his adopted brother. Yes, I am liking you more and more Trouble Curse Duke. Someone should have knocked these two jokers’ heads together seasons ago.

They reveal the open Thinny back in the only other town that we’ve visited this season, and then Dave conveniently has a flashback or flashforward or whatever to his time “on the other side.” Croatoan? Remember that? Vaguely. Me too. Too much is happening too fast. They go off on an ill-timed and ill-thought out journey to get to the bottom of his mysterious “visions.” Shouldn’t they have done this weeks’ ago? At the same time we are side-tracked by the Trouble-of-the-Week, which sees a father scared over his children lock them in a dangerous place to keep them safe. Because, you know, that happened. Audrey, of course, deals with this quickly to get this storyline out of the way so that we can return to the reveals.

Duke and Mara have formed an unholy alliance to reach the Thinny and leave. Only Duke is planning to stab Mara in the back. And Mara is planning to stab Duke in the front. So, this is a good plan. While Mara and Audrey’s mum has come up with a suitably mad solution to fix the Troubles. Audrey is going to “help” Mara, and then Mara is going to voluntarily end the Troubles. Hmm. What nature will this “help” take, you ask? Why, we are going to combine Audrey and Mara together. The “goodness” that is Audrey has bene leached out of Mara, so we need to put it back. Maybe she’s going to get Audrey and Mara to run at each other really fast and hope that something happens.

Audrey and Nathan have a terse and tearful conversation, as usual. Nathan promises to get her back, as usual. Audrey promises to “fight” to stay alive inside Mara, because, you know, that worked out so well last time. We finally get the Mara/Charlotte mother-daughter strop-fight that literally nobody has been waiting for. The cold-blooded badass Mara suddenly becomes a stroppy teenager while Charlotte becomes a passive-aggressive therapist, and what could have been a cool face-off is ruined. “I’m going to get dad back,” she spits at her younger-looking-mother. Say whaaat? But we do get some, shall we say, interesting reveals. So Mara has created the Troubles for love. Misguided love. For her dead father. And the whole thing of multiple personalities, the Barn and basically Audrey’s entire existence is Mara’s version of the naughty step.

Following a quick Duke/Nathan standoff, because that just had to happen, Charlotte does her Mara/Audrey magic trick. From two Emily Roses—one badass and the other sickly and coughing—we get one. Is it Mara? Is it Audrey? Some combination thereof? “It’s me,” Audrey says as she runs into Nathan’s arms. What about the Duke bomb? Oh, don’t worry, Mara said she deactivated you. I guess everything worked out for the best?

Wait, you thought that everything worked out? Wrong. Duke goes boom, curse Troubles (last time, I promise) stream out of face, thousands of curse Troubles (I lied) flying across the town and infecting everybody. Remember Dave and Vince bumbling around in the woods? Well, they’re still there and they’ve discovered a rock with the word “Croatoan” freshly carved on it. What does it mean? I have no idea. Where does Haven go from here? Not a clue. But I can’t wait to see it.

Mara : Hello, Audrey-husk.
Audrey : Mara.
Mara : This is so weird. I’d say it’s like looking in a mirror but you’re so pale and weak and that hair cut? No. No, no no. Bourbon?
Audrey : No.
Mara : Then we have nothing in common!